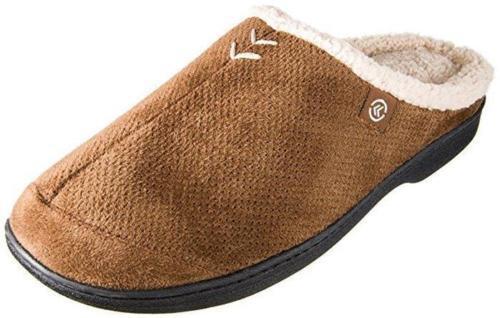 Isotoner slippers for men come with several different lining options, including fleece, memory foam, and microfiber fabric. Options for stylings vary, with some of the available options having laces and material behind the heel while others have no laces with no heel support. Isotoner offers men’s slippers in both single color and multi-color options.

What are some of the colors that are available?

What are some of the styles offered?

There are several Isotoner mens offerings in the moccasin style which come equipped with both a heel cap and laces in which there is a heel cap. Not all moccasins have these however. Isotoner mens microsuede and stretch faux moccasins both feature a heel cap as well as laces. In addition to options with heel caps and laces, there are slip-on mens styles with no heel cap. Microsuede and microterry clogs from Isotoner do not feature heel caps or laces. Boat-style options feature lacing and heel caps. Certain moccasins do not feature lacing on the front side. For example, the microsuede moccasins with a braid feature a heel cap without lacing on the front side. Whether or not a certain moccasin style has lacing varies on an individualized basis

What colors are the interiors?

Content provided for informational purposes only. eBay is not affiliated with or endorsed by Isotoner.