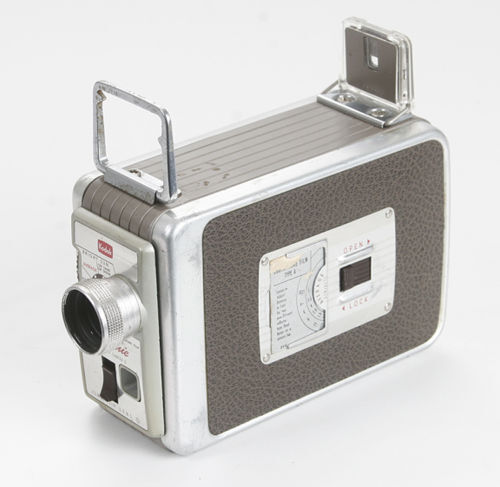 Film has been the standard medium for motion pictures since the late 1800s. The 8mm motion picture format was created in the 1930s and achieved widespread use over the years. You can create nostalgic videos using Kodak 8mm vintage cameras to provide a retro style for amateur or home movies.

What is 8mm film?

This measurement signifies the width of the filmstrip, which will only work with an 8mm video camera. Kodak developed 8mm film as a less expensive alternative to 16mm film during the Great Depression. The 8mm format has two versions: Standard/Regular 8 and Super 8. You may see standard film referred to as Double 8mm film or Double Regular 8mm film. Super 8 film requires a Super 8 movie camera.

An 8mm filmstrip is similar to standard 16mm and 35mm movie filmstrips in its appearance. It is about half the width of the professional 35mm film used for major motion pictures. You can tell which type of 8mm film you have by looking at its sprocket holes. For regular film, they are larger and almost square, in the shape of slightly vertical rectangles. The smaller holes in Super 8 film are elongated, forming horizontal rectangles. Film for silent movies is solid black; film that can record sound has a contrasting magnetic strip at the bottom and may have a narrower strip at the top as well.

How does an 8mm movie look?

After recording using a compatible 8mm vintage video camera, the film is processed or developed, then loaded onto a reel and viewed on a projector. Produced in both color and black and white, 8mm footage often has a retro, nostalgic look or a grainy, vintage appearance when projected.

How do you make a movie with a vintage camera?What is the power supply for this movie camera?

Early 8mm cameras do not use batteries or electricity. Instead, they use a wind-up mechanism, similar to that of a watch or a music box. Later models typically use AA batteries, but sometimes they use discontinued battery sizes.

Content provided for informational purposes only. eBay is not affiliated with or endorsed by Kodak.