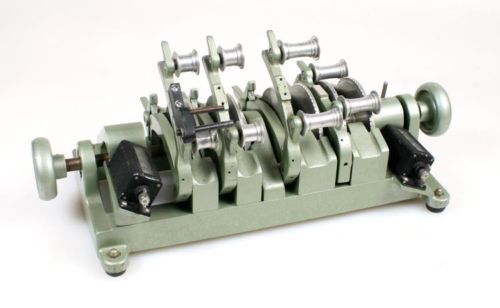 The History and Use of Moviola 16mm Movie Editing Equipment

The Moviola editing device debuted in 1924. It provided the first means for a movie editor to watch a film while editing it. The firm headquarters is in Hollywood where the motion picture industry still uses its products.

How does this device work?

This editing device allows the editor to view the film as they edit it. You can examine individual shots and clearly view composition, allowing determination of the ideal cut point. It runs the film through a sprocket system at the full speed of 24 frames per second. Unlike a projector, it includes no take-up reel since that would impede the editors access to viewed footage. Editors would literally cut the film in pieces and then splice it back together at their chosen join point using tape or glue. You control the forward and backward movement of the film using foot pedals, and a hand brake stops playback immediately.

What styles of this device exist?

From its invention in 1924 until the 1970s, the vertically oriented version of this device proved most common. During the 1970s, the industry began using horizontal flatbed versions. It now offers its more traditional devices and a non-linear editing system.

The firm makes editing equipment for silent and sound movies. It produces machines for 16mm, 65mm, and 70mm movies. You can find both cutting room and portable editing machines. It also produced projectors with take-up reels for watching the initial edited cuts and final cut.

What types of devices make up this equipment?

There are several parts working together that allow someone to edit 16mm film. Some of these parts include the following:

How can you learn to use these devices?

Some organizations, including the manufacturer, offer classes in its proper use. The firm offers a training division with online and on-site training, including webinars and an on demand library of training materials.

Content provided for informational purposes only. eBay is not affiliated with or endorsed by Moviola.