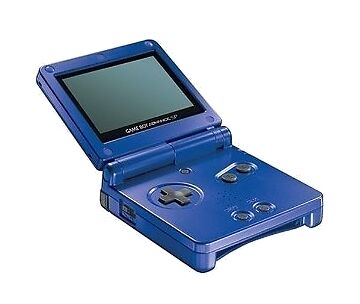 The Game Boy Advance SP is a handheld system that lets you enjoy retro 2D gaming on the go. Originally released in 2003, it is an upgraded version of the Game Boy Advance, the natural successor to the first Game Boy. Whether used, refurbished, or like new, this family-friendly system has something to offer for all gamers looking to add to their collection.

Which features were added with the Game Boy Advance SP?

The specifications of the Game Boy Advance SP are basically the same as the original GBA. That means it is compatible with the entire library of GBA games and many of the same accessories. However, the external design and several features have been redesigned, including:

What are some ways to customize the system's appearance?

The Game Boy Advance SP has plenty of different color options to choose from, including platinum silver, pearl pink, cobalt blue, graphite, and midnight blue. Nintendo also released a few limited-edition collectible models featuring unique designs such as the classic NES or the golden Triforce. These limited-edition systems may come with a game bundle if the design is based on a specific franchise. If you want to augment the system with face plates and decals, then you will need to purchase them separately.

The system is compatible with all Game Boy and Game Boy Color cartridges. If the game was designed for the Game Boy Color, then you can change the in-game color palette just as you can on the original system.

No, the system is completely region free. That means it is compatible with games made anywhere in the world, regardless of its country of origin.

Content provided for informational purposes only. eBay is not affiliated with or endorsed by Nintendo.