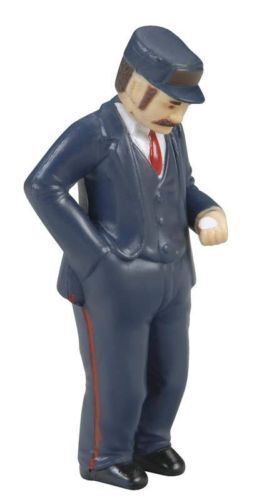 Individuals are attracted to model railroads for many reasons. Some enjoy the mechanical and electrical components of the hobby, others enjoy working with miniatures, and still others like the sculptural component of creating the setting where the tracks will be laid. One element that goes into creating that setting are the figures that represent people and animals.

What is O Scale?

Model trains come in different scales. These are ratios of the size of the model to its real-life counterpart. Some of the most common are N Scale, HO Scale, and G Scale. O Scale is a 1:48 scale. This means that one inch of model is equivalent to 48 inches in real life. Figures used for decorating model train settings are crafted to conform to predetermined standards such as O Scale.

What purpose do these figures serve in train layouts?

Model train enthusiasts add figures shaped like people, animals, and objects to their dioramas as a way of enhancing their detail and realism. They may also want to evoke a certain time and place. Adding people dressed in era-appropriate clothing can help achieve this.

What kinds of figures are manufactured?

A good deal of variety is available in terms of these figures. They can be classified into two groups:

When choosing figures, what additional options are there?

The model people used for populating a train layout can be shaped like men, women, or children. They represent all ages, from babies to the elderly, and are made in both standing and seated positions. They come with clothing from many time periods, starting in the 19th century up to the present day. They can also be attired to represent a very specific era such as the Wild West, turn-of-the-century Europe, or World War II.

From what materials are model railroad figures made?

Both painted and ready-to-paint versions of people, accessories, and animals are available in: