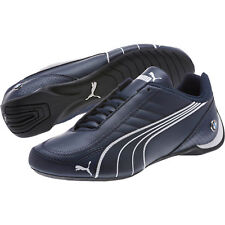 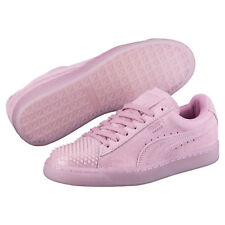 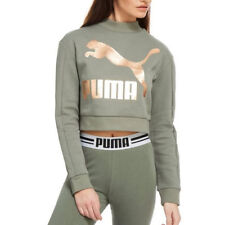 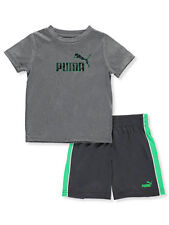 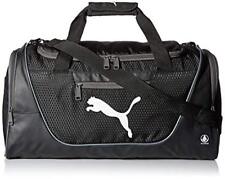 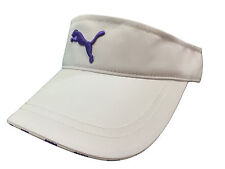 Mention athletic or “athleisure” wear and one of the first names that springs to mind is PUMA. For adults, kids, toddlers, and even babies, PUMA on eBay offers shoes, sneakers, clothing, and accessories that will keep your workout stylish and comfortable. Find the gear you love for:

Select your favorites from the many choices of PUMA shoes, clothing, and accessories, in any size, color, and style. PUMA’s newest designs on eBay will update your sports and casual wardrobe. You’re guaranteed to find the right look and feel for whatever sport you’re into. And if you’re looking for shoes and apparel for living the relaxed life, PUMA has that covered, too.

Wondering what Rihanna’s latest collaboration is? The Fenty PUMA line by Rihanna offers a gorgeous array of shoes, clothing, and accessories in her signature opulent style. From sneakers to track suits, leather purses to boxing robes and jelly slides, Rihanna’s taste is elegant, expressive, and powerful. In 2014 Rihanna was named Creative Director of PUMA’s women’s wear, but she’s not alone as a design collaborator in this star-studded company.

Whether you’re browsing for yourself or for one of your favorite athletes, child or adult, eBay offers a full selection of PUMA’s extensive line of:

In footwear, try the Basket Classic, or for something a little flashier, Zandy’s Patent Wn’s, PUMA’s Creeper Wrinkled Patent or Tazon 6 FM. Craving a new pair of PUMA suede Classics? They’re available in a dozen colors on eBay. Accessories feature everything from goalie gloves to backpacks, soccer balls to neck warmers, armbands for your phone to beanie caps.

PUMA: A History in Brief

This multinational giant began in a German town in Bavaria in 1924 as a shoe factory owned and operated by the Dassler brothers, Adolf and Rudolf. Over the years, their relationship frayed, and by 1948, they split the company, with Adolf forming Adidas and Rudolph eventually naming his company PUMA. Over the years PUMA has attracted the top-rated athletes from every sport to wear their logo and out-perform their competitors, just like PUMA does.

A few sports stars who have worn the PUMA cat are Pelé, Eusébio, Johan Cruyff, Diego Maradona, Clyde Frazier, Lothar Matthäus, Hristo Stoitchkov, Rudi Völler, Boris Becker, and Martina Navratilova, among many others. The Jamaican track star, Usain Bolt, considered the fastest man on the planet, is under contract to PUMA. Football clubs Borussia Dortmund and Arsenal FC are sponsored members of the PUMA family, and PUMA endorses the national football teams of Italy, Switzerland, Austria, Ivory Coast, Ghana, and Uruguay. In Track and Field, PUMA sponsors the Jamaican, Cuban, and Barbados Athletic Associations. Most recently, in 2016, PUMA named Virat Kohli as a new Cricket brand ambassador and creative collaborator in India. These are only a few of the many athletes, clubs and associations PUMA has supported.

Almost since its beginning, PUMA has been developing new materials and technologies in their products, and this innovative approach has given them a decided edge in the footwear market. As early as 1952, Rudolf Dassler invented a football boot with screw-in studs. He called it the “Super Atom,” and he followed up this bit of brilliance the next year with the “Brasil.”

Always on the cutting edge of technology, PUMA was the first sports shoe manufacturer to “vulcanize” their rubber soles, making the rubber less sticky and tougher. Their improvements have always been targeted at specific needs for each sport. Golf shoes, for example, were enhanced by stormCELL waterproof materials and SmartQuill traction technology for greater grip. For those who play outdoors in cold climates, there is PWRWARM technology to keep your feet from freezing, while IGNITE™ cushioning enables greater rebound. For kids, PUMA developed INSPECTOR, a growth control system for children’s shoes. And for those involved in motorsports, the year 2000 saw production of fireproof footwear, developed in partnership with Porsche® and Sparco®.

The innovations don’t stop with shoes; even sports bras have been designed to retain heat and provide comfortable support with PWRWARM and PWRSHAPE technology.

How is BTS involved with PUMA?

PUMA conferred the role of company ambassadors to the Korean boy group, BTS, in 2015. The group has filmed several commercials promoting shoes and apparel.

When you want to pump up your workout and enhance your performance, do what the pros do: search for PUMA on eBay for every single item of shoes and athletic wear.